Friday January 24th 2020, the eve of the Spring Festival (Chinese New Year) in China, sees the world’s largest human migration as, despite the spectre of coronavirus, hundreds of millions of people will leave cities across China to visit families and friends in rural parts of the country.

Here are the top five festivals that see the highest number of humans on the move.

No. of people traveling: 2.5 million

The Hajj is the annual Islamic pilgrimage to Mecca. This pilgrimage is a mandatory religious duty for Muslims that must be carried out at least once in their lifetime by all who are physically and financially capable of undertaking the journey. The state of being capable of performing the Hajj is called istita’ah, and a Muslim who fulfils this condition is called a mustati.

Part of Hajj is being seen as equal in the eyes of God. All men wear two pieces of white sheets so that all the attendee’s wealth and social status are the same. Women’s clothing is less restrictive, but they must wear white and they can only show their hands and feet.

For Muslims around the world, the Hajj is considered a spiritual pinnacle.

No. of people traveling: 21 million

The Arba’een pilgrimage is significantly larger than the Hajj pilgrimage to Mecca but nowhere near as well-known.

Millions of pilgrims will gather in Karbala on Arba’een, making it the world’s largest annual human gathering. Making the pilgrimage, known in Arabic as the Ziara, many of the pilgrims travel barefooted from across Iraq and more than 50 countries. Over three million Iranians travel to Iraq for the Ziara.

Arba’een marks the end of the 40-day ( Arbaeen means forty in Arabic ) mourning period for Hussein Ibn Ali, the third Shia imam and the grandson of Prophet Muhammad.

No. of people traveling: 54 million

Thanksgiving Day is a national holiday in the United States of America on the fourth Thursday of November. The American tradition of Thanksgiving dates back to 1621 when the pilgrims gave thanks for their first bountiful harvest in Plymouth Rock. The settlers had arrived in November 1620, founding the first permanent English settlement in the New England region.

The holiday continues to be an occasion for Americans to gather for a day of feasting, football and family. It also marks the start of the “holiday season”, which refers to the period from Thanksgiving until the New Year. Most people in the USA and Canada travel back to their hometown at some point during this period to take time off and spend it with their families.

This is the only migration in our top five that doesn’t take place in Asia.

No. of people traveling: 220 million

The second-biggest human migration is a bit different from the rest. Firstly, it is not a public holiday like the others and secondly it is not an annual event.

Kumbh Mela is a Hindu religious festival which is celebrated over a 12 years cycle. During the cycle, the site of observance rotates between four pilgrimage places on four sacred rivers, at Haridwar (Ganges), Ujjain (Shipra), Nashik (Godavari) and Prayag (Ganges-Yamuna Sarasvati confluence). Depending on what position the Sun, Moon, and Jupiter hold in that period in different zodiac signs, the venue for Kumbh Mela is decided, which means it isn’t a simple matter of holding it every three years.

Each festival attracts millions, with the largest gathering at the Prayag Kumbh Mela and the second largest at Haridwar.

The Kumbh Mela is the world’s largest festival and human gathering. It has been inscribed on the UNESCO’s Representative List of Intangible Cultural Heritage of Humanity.

No. of people traveling: 415 million

Also known as the Spring Festival or Lunar New Year, the Chinese New Year is China’s most important festival. The new year begins on the second new moon after the winter solstice (December 21st) and is the biggest human event on Earth by some distance as practically all of China takes a holiday at once. Usually the public holidays last for a week.

The main Chinese New Year activities include putting up decorations, sharing a reunion dinner with family on New Year’s Eve, lighting firecrackers and fireworks, and giving money in red envelopes and other gifts. And sitting in traffic jams.

This chart prepared by Statista ranks different events around the world by the estimated number of people who travel for it. 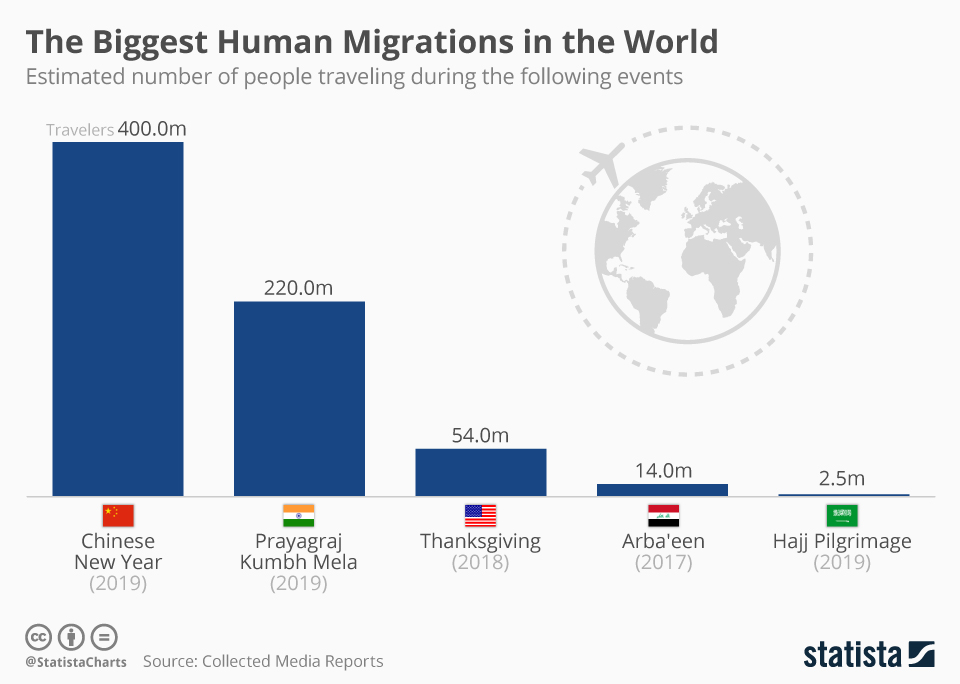 You will find more infographics at Statista

Traditions of the Dormition of the Virgin Mary in Greece